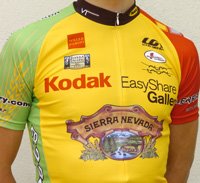 I bought a Sierra Nevada team issue jersey on the cheap over on eBay a couple of days ago. The guy I bought it from happened to live just down the street from my place in Santa Clara, so we just made arrangements for me to pick it up rather than pay shipping charges. When I showed up, the dude came down the stairs decked out in Sierra Nevada hat and shirt, and I started to wonder if that face looked familiar...

Turns out, I bought a jersey from Ben Jacques-Maynes, who is the sole remaining Original Gangsta on the Sierra Nevada / Kodak team!

It's pretty cool to own a jersey from my favorite pro team and my favorite beer maker, no matter how much of a poser I might be. And the way it came to me is even cooler. It's a small world, and I'll rock my used jersey with pride!

Now if I can get rid of the damned virus/cold that has plagued me for seven weeks now, I might put some more miles on the new threads. Tomorrow, it's off to the Ear/Nose/Throat specialist. Sweet.

Oh, and I can't forget to point you over to the Jacques Mayniacs site. Good luck with the rest of your season dude. Maybe the Schwarz be with you.

Maybe Ben will eBay me a little of his legs and lungs.
Posted by Gino Zahnd at 6:43 PM