Farewell Sheldon Brown. You're a legend. Today I received the news that one of cycling's most storied and passionate characters, Sheldon Brown, passed away.

I don't really know what to say.

Rob Hawks, a bay area cyclist summed it up as well as any:

"It is undeniable that Sheldon has influenced many, many people in the bicycling world. I read with sadness of his passing. The thing though that I've always remembered about Sheldon all along are some of the non-cycling elements to his communications with others. I loved and will now miss the quotes contained in his signatures to postings to the list. I'll also remember an email exchange I had with him off list regarding music. I had come to discover a band very late in my life and many years after the date of a recording, and mentioned this band and recording to Sheldon. His response had such enthusiasm in it and it put me in mind of being on the opposite side of the experience where one can look with a little bit of envy at someone who is just being exposed to a work of music, literature or film that had a profound effect on you at an earlier time.

Certainly, I've looked over Sheldon's cycling oriented articles, but I've also been intrigued by the other parts of his vast web pages and all the other passions in his life.

Poke around on those pages. It is amazing I think to see all the different things a single person can be so enthused about and really get into in a big way. 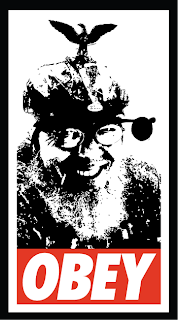 With that, all I can add is this: Sheldon, we only ever communicated via email, and you only ever offered sage advice, and always with a level head and sense of humor. You were always a great point of reference to all of us, and like Rob says, you'll never be gone.

Rest in peace Sheldon. Your contributions to cycling and general Good Will are as large as anyone in history.

With that, JimG (idea) and I (execution) offer up to anyone who wants them, these badges. Sheldon, whether you like it or not, you have a posse.
Posted by Gino Zahnd at 5:13 PM