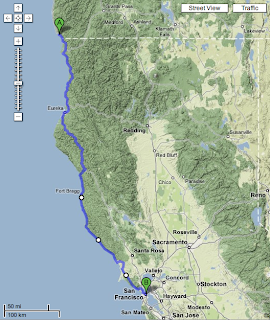 This Friday, Jeff and I are headed out for a 420 mile self-supported tour from Brookings, Oregon to San Francisco. This is a first for both of us; for Jeff it's a way to celebrate his 40th year, and for me it's a celebration of living in one of the most beautiful places on Earth, and being lucky enough to know people like Jeff.

Our route will traipse the coastline, and we've designed it with the intention of sampling the yields of as many coastal breweries as possible, hence our broken Spanish title: El Gran Vuelta de bicicletas de la costa Cervecerías 2008, which poorly translates to The Grand Bicycle Tour of the Coastal Breweries 2008. We thought about a French title, but really, this is California...

As regular readers may know, we are both beer connoisseurs of sorts, and there are simply too many breweries along our lovely coastline to just pedal past. So, on the list for this tour:

And we may very well end the tour at 21st Amendment in San Francisco.

Several of my favorite breweries are just barely not on this course, including Russian River Brewing, Lagunitas, and Mendocino Brewing. Those plus several more are all in Sonoma county, and that sounds to me like a good three day weekend tour for a different time. :-)

Now I know that was an awful lot about beer, but really this tour is only slightly about sampling local beers along the way. In fact, it's hardly about beer at all.

It's mostly about moving along a ravishing and world-famous coastline under our own power, and on our own time.

Take photos. Stop to drink in the scenery; hopefully feel the fog, and if we're lucky, a bit of rain. Take any suffering in stride, and know that suffering is likely of our own doing, and that the sum total of the adventure is pure pleasure. See the coast in a way that most people never will. Camp out all but one night. Watch cable television the night we don't sleep out. Maybe see some stars and ocean and moonlight over the water. Get really dirty and definitely stinky. Ride these miles and have this adventure now, because I have no idea what tomorrow will deal.

That's what this is about for me.

Jeff is riding his SOMA Double Cross, and I, my Rivendell Saluki. We've given them several loaded riding tests, done some S24O trips this year, and I think we're ready. We've planned each day's route (over a couple beers), and that's pretty much nailed down. I've been testing a bunch of wool gear from Ibex all summer, and this tour will be the final beat down on that stuff before I write up several product test reports (including arm/leg warmers, knicker/tights, and a bib.).

Special thanks goes out to our families (my wife, his wife and daughter) for giving us the time and freedom to do this. THANK YOU!

Until we return, keep 'em turnin'!

Dude, have great ride. I'm looking forward to the photos.

That sounds like a blast! You'd better be posting photos from along the way!

Enjoy it! What a great route. Good for you for getting out & doing this.

Awesome! Enjoy the ride, and god help all the brew pubs in your path.

Enjoy the ride, and may god help all the brew pubs that lie in your path!