It's not something I'd ever felt before, I can tell you that much. In the season opener of the 2008-2009 Shasta Race Series, I bolted off the Le Mans style start like Richard Pryor when he caught his hair on fire, my strategy: Go Till You Blow.

I got the hole shot.

I mashed out the first climb.

Through the flats and over the barriers, and twisting through the oak-studded single track, I could hear racers bearing down on me. Chains were slapping. People were spitting. One guy tapped my rear tire on a climb, and apologized. Through heaving gasps of desperation I replied something like, "don't worry 'bout it dude, we're in a race!"

They kept breathing down my neck as we worked our way across the course, but the buzz of many slowly turned to fewer. We covered more technical terrain, and then fewer. Upon dismount before the last set of barriers on Lap 1, my cleat got stuck in my pedal, but I managed drag my bike and free myself just before yard sale-ing in front of god and everyone at the chute. There was still the noise of being chased, too close, in fact, and it worried me immensely. Just behind me as I cleared the second barrier, I hear a BANG KLANG THWACK. THUMP. Followed by a hearty, "FUUUUUCK!"

A clear moment of silence. Just me fluidly remounting, trying to keep moving. Click. Pedal in. Click. Other pedal in. Don't hurl. Can you pedal harder? No? Well just try to keep it up.

When the cowbells and familiar voices of my friends and teammates broke the silence that was in my head, I was bombarded by words I'd never heard before: "GO GINO, GO MAN. GO GO GO GO MAN GO YOU'RE OFF THE FRONT!"

I was too scared to flip a glance over my shoulder for fear of veering off course into poison oak, oak trees, or rocks; my pace was still frantic. My pipecleaner legs were on fire. So I kept mashing the pedals, heaving, heart rate at 10% higher than whatever it should've been. The first glance I was able to steal found an empty section of doubletrack behind me about a half mile into the next lap, with no other racers that I could see. But I still didn't trust my eyes, so I mashed on. The first time it really sank in that I was in the lead position was at a 180º switchback, which gave me a clear view of the field. I had gained at least 15 seconds on the closest riders after the crash behind me, and by this point I had settled into a pace that I could maintain. And by maintain, I mean that the puke stayed right behind my epiglottis, rather than the outward side of it.

So here's the thing. I've never been at the front of any sort of race, ever. So I wasn't prepared for the mental switch from offense to defense. I was completely blindsided by the feeling of pedaling out there alone, wondering how much I could back off, but not so much that I would have to fight so hard again. I've only ever been trying to catch someone. This time, I had everything to lose. Focus, man!

For the last two laps, I managed to keep up my pace, avoid crashing, and ended up winning my first race ever. Now I'm fully aware that it's no big accomplishment, winning a Category C race in northern California, especially when I compare it to other things I've done with my life. But for a lifetime average joe athelete, maybe slightly less-than-average, well, it was righteous. I savored every tiny painful second of it, and I've run through the details of how I could've been faster a thousand times in my head. And if it never happens again, well, it happened once, and this once I got to taste victory. And victory doesn't suck! Especially when it comes with a 1st Place Pilsner glass and a $20 purse!

To use a cliché, sometimes the stars just align. Sometimes you cast that perfect loop with your favorite bamboo flyrod. Today, for me, it was winning this cyclocross race. But in my personal bigger picture, I feel like Claire and I have really hit a stride in Chico that feels juicy, and solid, and indescribably Good and Fun. We're squeezing this place for everything it has to offer, and it has taken three and a half years of living here to get to this point. And it feels like it only keeps getting better. We have an amazing, no AMAZING, group of friends - in Chico, and in the bay area. Our jobs are currently both going a million miles an hour and keeping us traveling all over California all the time, and for that I count my blessings daily. I have a wife that I'm nutso over, and we just celebrated five years of being hitched; it still rocks to see her every single day. We both get along with our parents, and even like them all. We live in a town that has three farmers markets every week. We eat fruit and veggies out of our own garden from May until late December. Even our neighbors, while half crazy or half redneck or both, are perfectly fine neighbors. Our health isn't horrible.

You know, things are just good right now when it's all said and done. Sometimes it's probably a good idea to step back, and write down all the goodness, because sometimes the badness can overshadow it. Sure, there are plenty of things that are bad-to-awful in my life, and they could each get me down. But not me, not now.

All of this, which is to say Happy Thanksgiving! Unless you're starving in a desert with no water and no way out, you probably have something to be thankful for. Just give it a thought, eh? 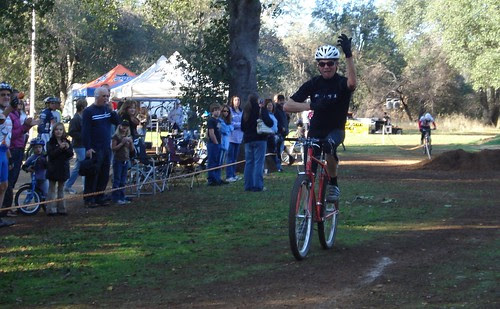 In my head, this is what Cyclocross feels like.

This particular event is a yearly semi-private gathering of friends at Casa Galland in Chico, California. We get together and dress up like girls, drink beer, race cyclocross, and then drink more beer. See, Chico and bikes and beer go hand in hand.

Thanks to the Bronx (without permission) for the music. You guys rawk. Hard. thebronxxx.com/
Posted by Gino Zahnd at 11:03 PM 4 comments: 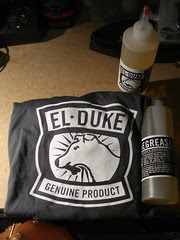 Sorry Park, but El Duke is my new way to get stuff clean. It's solid. Plus, a dog with a bone logo is unbeatable in itself. You know how we do.

You can get yer own El Duke here.
Posted by Gino Zahnd at 7:03 PM No comments:

A Bicycle Light Mount for the Masses

This bicycle light mount is designed to do two things:

1) get your bicycle headlight down low, where it should be. Handlebars are not a great spot to mount a headlight. (more on that below)

2) hold about 99% of every battery powered handlebar-mount style bicycle headlight on any 5mm (M5) brazeon that is on your bicycle. So, if you have a little front rack, or mid-fork brazeons, or even eyelets for fenders near your fork dropouts, then the Gino Light Mount will help you better light your way. It can also work for tail lights.

But Gino, why do I want my headlight down low?
Great question! A light that is mounted lower casts a beam that is closer to parallel to the ground, which results in a less bright beam that lets you see further ahead. And yes, the lower light casts more shadows from bumps, cracks and potholes, which is precisely what you want a light to do. Show me the surface irregularities, man!

The mount has undergone many thousands of miles of testing at this point, including a 500 mile tour of California, the Rocky Mountain 1200k, dozens of mixed-terrain rides, and countless
daily commutes, with good results! Here is one review: http://readytoride.biz/?p=342

That said, get your Gino Light Mount at the Paul store.

For more on bicycle lighting, and why down-low is better, see:
Bicycle Quarterly Volume 5, Number 2

You can also check out a bunch of long-distance bicycles that have been tested by BQ, nearly all of which have the lights mounted low, here. 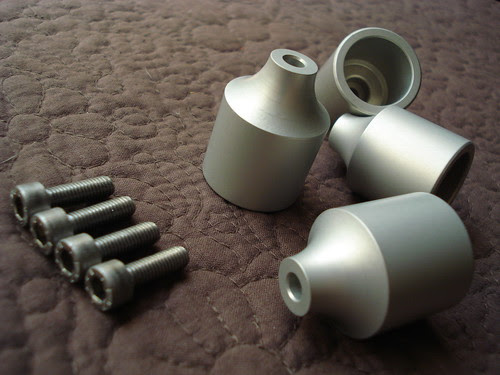 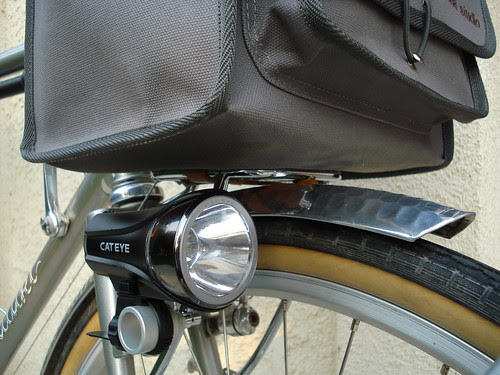 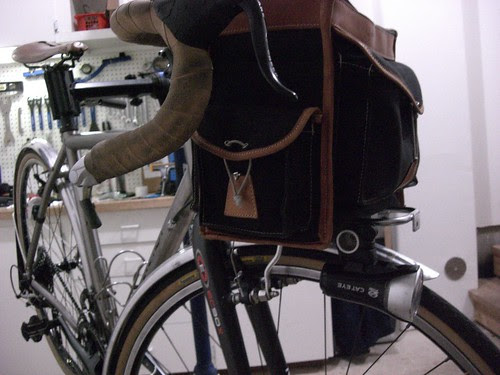