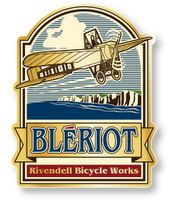 This weekend I got Quite The Good Deal on a new 57cm Rivendell Blériot frameset. The Blériot is made to sport 650B wheels, and is lugged steel. But of course!

Now what? How to build this puppy up? I've been thinking I'll build it up to be a workhorse commuter/townie/grocery-getter bike that could double as a mountain bike for fire roads and other rough roads that don't have big drops or boulders.

The following bikes aren't other Blériots, but they are points of inspiration thus far: 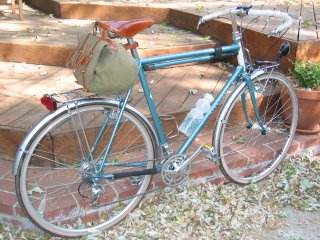 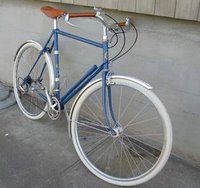 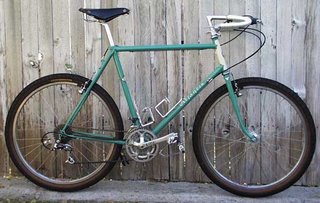 See, the Blériot can take tires as big as 41mm WITH fenders. If anyone would make them, I reckon a guy could squeeze 50mm tires, if not bigger; and that would make for a fine semi-rough trail bike.

So what do you think in terms of a build? Mustache bars or Albatross? 48/36/26 triple? What on the rear? Lighting suggestions?

Before you quit reading, here is some stuff worth sharing that I've found along my 650B way.

The 650B is not a bike for the old, fat, and dorky. It's a bike for long days, wandering country rides, and the sort of attitude that comes with "going for a ride" rather than "having goals for the season." I have a goal for this season, I tell you: it's to ride my bike a lot and to go out for long, long days with lunch in a saddlebag.

Can I tell you? I dig Steve's attitude! And check out the 650B Tournesol and 700c bikes that he makes; the details are simply beautiful. Obscene, even.

2
I stumbled upon possibly the funniest Interbike photo of all time, on Sheldon Brown's site. For those of you not in the know, it's Grant Petersen kneeling in front of a spankin' new Bridgestone carbon fiber racing bike. Heh.

3
This bit is from the Blériot Owners Group on Yahoo! Groups:

"A couple members have asked me to give the brand and color of the nail polish that I think will make pretty good touch up paint. DISCLAIMER...I have not tried it on my Bleriot...only on my toes.

When my toes are held up to the frame it looks pretty darn good, but you might want to try it on an inconspicuous place first.

4
Lastly, have a read about the real Louis Blériot, and his record-setting flight across the English Channel. 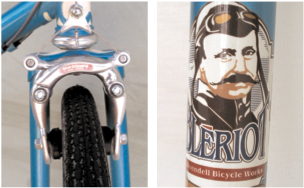 So anyway, I'd love to hear suggestions on buildup schemes for this Blériot!
Posted by Gino Zahnd at 3:03 PM

Lovely Rivendell build! I'd go w/ something similar to that. Whoever thought out that design is truly visionary...:) Needs a kickstand though!

Yeah David, that Rivendell with the mustache bars is sweet, eh! A real genius must be behind that one.

my bleriot will be a country bike with a Carradice on the back. my Surly LHT is built up with 'stache bars and panniers (well, will be. it has the Carradice right now). but more importantly, make it into a bike you want to ride all the time. make it yours.