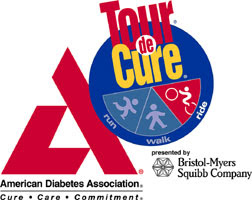 I've never raised money for anything. I guess I'm a bit too fierce a Libertarian; I don't like people asking me for my hard-earned coin, and I don't like asking other people for their money either. But this year, I figured I'd loosen up a little, and try to put all these miles that I ride toward some good.

The Tour de Cure is one of two fund raising rides that I'm planning for 2007. The other will be the MS Waves to Wine two-day tour from Napa to the California coast, in September.

Why am I doing these rides? Here's what our team site says:

We are determined to reach our goal one rider at a time and as a team.

Why Ride? We're riding for my brother Matt, my friend Corey and that cute girl I dated in high school. We're riding for Gino's sister and Phil's friends and family that are dealing with it.

We invite all riders from Chico or those who have ties to Chico to join us on the team or through a donation.

Yep, my sister has diabetes. Jeff's brother has it. Apparently, Jeff hooked up with a diabetic in highschool in the 80's... In fact, I'm sure we all know someone that has to deal with Diabetes; we all know that Diabetes sucks and that it is a pain in the ass, at best. So why not raise some money for research, and further the effort to find a cure?

That said, we'd love to have anyone that wants to join our team come out and ride with us in May. And if you can't join or ride, any tiny donation for the cause counts. Yahoo! has donated $100 $200 on our team's behalf to the ADA, and I'll be matching that, at least.

Want to pitch in? Make that donation right here, and keep some of your hard-earned tax-deductible bucks out of Uncle Sam's pocket.
Posted by Gino Zahnd at 11:39 AM

That is very noble Gino.

Team JuG powers the JuGgernaut! Get the word out!!!

I don't know if noble is an apt description for my part in these rides. Perhaps, "useful" or "purposeful". ;-)

My 6 yo has diabetes.

Thanks for doing the ride.