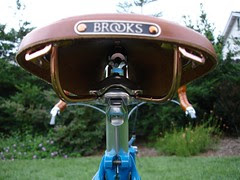 The Brooks B17 isn't laden with technology. In fact, it hasn't much changed in twice my lifetime. The only surprise I have had with the Brooks B17 Champion Special is that I love it, and if anyone tries to take it from me, I will have no choice but to freak out.

I have gone through more saddles than anyone I know. I've tried Selle this and that, cut-out saddles that claim to prevent numb plumbing, carbon this, Italia that, and I know with 100% certainty that my heart and my tender parts lie with the fine products from Brooks England Ltd..

The Champion Special model is quite a bit nicer than the Standard in both looks and quality. Aesthetically speaking, I'm a fan of the hand hammered rivets and copper rails. The functional superiority comes in the form of leather that is significantly thicker than the standard. You might think that there is a downside to thicker leather; that it might take longer to break in, or hurt more. The truth is that both my B17 Standard (which I will review later) and my B17 Champion Special were both the epitome of comfort within 100 miles of use. By 300 miles I was in love, hence the freak out threat above. By 800 miles, the Champion Special is quite simply a hammock for my butt. 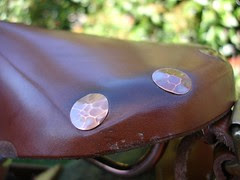 I can ride 70 miles with zero numbness, zero saddle soreness and no chafing. This statement comes after years of futzing with saddles, wasting money on every kind of gimmicky saddle out there. Well, almost every kind.

If you're wondering why your Italian/plastic/padded saddle is leaving you less than satisfied, I recommend trying a Brooks B17. Don't believe me though; just look at every long distance tourer or randonneur; they all ride Brooks, and I have no doubt why. Ladies, Brooks makes the B17 S, which is specific to your anatomy. 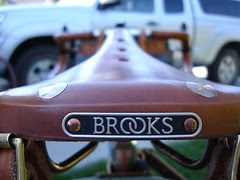 Some people have said to me with exasperation, "...but Gino, those Brooks saddles are just so heavy!" To that, I offer the truth: what you gain in less saddle weight doesn't matter the least bit (I have a future post on weight), and your body will thank you. Unless you're an elite racer going head to head against other elite racers, who gives a crank about a few grams?
Posted by Gino Zahnd at 1:22 PM

Nice review. Your feelings on this matter match my own.

With regard to comfort vs weight, on a long ride, I will take the comfort of my B17 (w/~15,000 miles) any time. If the weight simply cannot be accommodated, the B17 with Ti rails is avalable at twice the price, and a weight that is on par with many decent quality modern saddles.

Dang, I like the Selle SLK but they only last a year before it's deformed and slumping in the middle. I just got the Selle SL something or other with the cut out to see if it might have similar comfort to the SLK and be stronger. It's not really comfortable.

I should have gotten the brooks and will now revisit this decision everytime I ride.

I’ve never tried one, but they sure look good. Might consider in the future. You certainly seem to be a satisfied customer.

Well, with only 80 or so miles on my knock off Brooks, I'm seeing a difference over the the other saddles I've tried on my tourer. You convinced enough to try one out and I think I'm sold for the long distances.

Gino,
I was wandering. I've ridden my B17 for about 1000 miles now. I live in so cal and my saddle got wet for the first time last weekend on the MS ride from Irvine to San Diego. Now it looks like it might be cracking near the rivets. In your experience is this possible?
Sean

Sean - I personally haven't ever seen that happen on my saddles. I have read elsewhere - and that just means I've read it and not that it is truth - that Proofhide or Obenauf's will help keep the leather from cracking around the rivets.

I'm pretty good about condition my saddles, so perhaps that's why I haven't seen any cracking.