On Saturday, along with about 500 others, Jeff and I took part in the inaugural Ride the Rogue Century. The course started in the town of Rogue River, and meandered in a loop through the Rogue and Applegate valleys for 104 miles.

The course well very well marked, and everything was well-run. Kudos to the crew that pulled this ride together, and pulled it off. I've always had a magical picture in my head of what the Rogue River valley holds, and true to its name, I wasn't let down. The roads wind through various eye-candy-beautiful terrain (with only two small hills),including sections adjacent to the river, sub-alpine forest, and through a couple of small towns.

The rest stops were nicely placed; there was one about every 20 miles or so, including a stroke of genius stop located at mile 94. Placing one at this distance really gives you the fortitude to pull through those last painful miles, even if the only reason is because you get to see a bunch of other suffering fools who will finish the ride with you. That alone is enough to get you to the end. The absolute highlight for me was being pulled through Southern Oregon wine country in a slipstream averaging about 22mph; a close second was the 10 minute downhill at mile 35 (or so?), where Jeff and I were doing 35+ the entire time. :-)

Quite frankly, I wasn't prepared for the ride. My "training" schedule has been a joke this year because I split my time between Chico and Santa Clara. So my "training" rides have happened on Saturdays and Sundays, with a measly daily bike commute during the week. A graphic of my weekly training would look like an EKG: 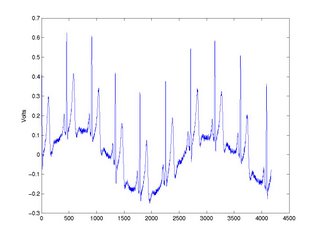 That said, I made to the half way mark with no problems, averaging about 17.6mph. The halfway point also was the lunch rest stop... and after lunch I couldn't quite pull it together again. I stayed around the 17mph mark until mile 70, at which point I fully recalled the feeling of a full-on BONK; I mean, like BONKATRON 3000.

From the 70 mile rest stop, I was a limp noodle with legs pumped full of battery acid. I rode alone from mile 70-90, most of the time thinking how stupid it is to ride more than 60 miles, and that now that I'd finish a century, I'd never have to do it again. I went through that mental battle where the devil on my right shoulder was going, "Dude, you just have to stop pedaling and lie down." And the little guy on the other shoulder was saying, "If you quit you pussy, you'll regret it!" I don't think he was an angel though... At mile 80, there is a hill that will test your mental stability. It was the only time in the ride that I flipped over to my little chain ring; it was all I could do to get through it! That hill was probably the loneliest stretch of road I've ever pedaled. Haha.

At mile 90, a team from Land Shark (at least they were all donning Land Shark clothing and bikes) showed up and pulled me into the genius mile 94 rest stop. I laid down, sucked down a Hammer Gel, a PowerBar salty/caffeine gel, a bottle of water, and limped my way toward the finish line... ending with an average overall speed of 15.6mph.

All in all, it was a beautiful day. We started out with layers of clothes on and numb fingers and toes; we ended with shorts and jerseys. I love that kind of cycling day. not too cold, not too hot.

We ended the day by staying at a nearby hotel in beautiful Ashland, picking up a six pack of Drop Top Amber, and ordering a pizza... and sleeping for nine hours!

So now that I've done a century, will I do another one? One part of me says that's enough, just like I said after my first and only marathon. I did it, and now I don't need to prove it to myself again. Sixty miles is a great distance to ride. I get a killer workout, the riding is fun, and that amount of time seems good for me to be on the bike. Beyond the sixty mile mark, in my case, is the point of diminishing returns. The exercise benefit isn't increased, but the misery is drastically increased. Plus, what am I proving?

The other part of me says that I Live In Chico; and because of that, there is no choice but to ride the full distance Wildflower. After all, it's only 96 miles... we'll see.

Oh, and I'll definitely be back at the Ride The Rogue again next year, whichever distance I choose. What a beautiful ride! :-D
Posted by Gino Zahnd at 1:28 PM

I'm really surprised to hear it was your first century. I love doing those organized rides cause you don't need to worry about packing food. To boot, some rides allow you to bag up your extra clothing and leave it at a specific rest stop so they can cart it to the finish for you to pick up after the ride.

Paskenta Century isn't too far off... since you're all used to the headwind already.

Yep, it was my first century. I love riding, but I've just never bothered going that far.

I stuffed my clothes into a Nigel Smythe saddle bag, and also stuffed Jeff's jacket in there. *I* was the clothing cart. Haha.

Congrats Gino! My first century was last year's Wildflower - we gotta do it next year!! Like I mentioned to Jeff, would love to get in on this ride with you next year. As for the dirt - let's get together and hit Upper Park soon / just back from working a week in Utah with NO mtn bike - ugh!! Great job - let's go ride!

It's funny to read this nearly a year later. I've done other centuries, and have more planned, including at least one brevet in 2007. Heh.