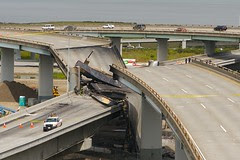 Originally uploaded by Scott Jones.
I wish I could get more coverage on this post.

Over the weekend we all heard the horror stories predicting traffic mayhem due to the collapse of a span of the Macarthur maze in Oakland. Reality is this: I commuted in the casual carpool, the same as I do every morning. The only difference today is that I had a glimpse into How Much Better the bay area could be if people would stop driving and start taking public transportation, riding bicycles, or carpooling.

Apparently, everyone WAS doing those things today, because it took me 12, yes TWELVE minutes to get from Elmwood to San Francisco. Yep, 11 miles to San Francisco in 12 minutes at 8:30am on a Monday.

There were literally zero cars at the Bay Bridge toll booths. It was as if the bridge traffic went back to its not-so-humble beginnings in 1937:


I chose to take the carpool this morning because I wanted to see the damage first hand; I was willing to take the horrible traffic that had been predicted. And I have to say, as we were whizzing by at 60mph it was a fantastic site, to see such a large piece of Modern Construction lying in ruin. CalTrans already had their heavy equipment out tearing down the scorched remains, and otherwise things were better than normal.

I've also heard many stories at this point about companies allowing employees to telecommute during this Time of Crisis. Why can't tech companies just accept that many people are better at their jobs when not wasting their time commuting and sitting around in an office? Why save it for times of crisis? Hey employers, why not back up your Green Charade, and start practicing what you preach? Get more employees to telecommute. It's good for the employee, good for traffic, good for the environment.
Posted by Gino Zahnd at 9:41 AM

That is amazing! I would have thought, like everyone else, that traffic would be a nightmare. I found some media coverage you can use in your posts, take a look at what Arnold had to say about the crisis:

It took the Y! Shuttle 30mins longer than usual (1:30 total) to get to work on Monday morning -- likely all that non-existent Bay Bridge traffic decided to use the San Mateo Bridge instead, clogging up 101.

I hear ya on the other points, though!