Back in the olden days 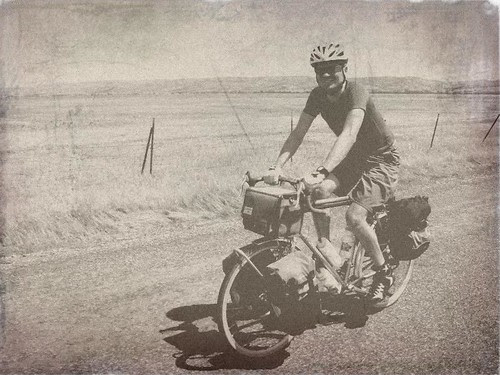 It is by riding a bicycle that you learn the contours of a country best, since you have to sweat up the hills and coast down them. Thus you remember them as they actually are, while in a motor car only a high hill impresses you, and you have no such accurate remembrance of country you have driven through as you gain by riding a bicycle.~Ernest Hemingway

Nice picture--in the thumbnail size on Flickr, it completely fooled me. :-)

Old Ernest was a mess, but that quote is one of the best things he said. I was thinking about that the other day when I realized that it was only riding a bike that gave me an idea of the the real topography of downtown Charlottesville--ridges, stream valleys, etc.

hey a chico townie here & regular lurker here, believe I linked through a post on Ed awhile back. Love to read and see photos on any/all bike tours around Chico. It's a bit more armchair for me though since I'm out more on the motorcycle than my bike recently.

Ever take a fat tire all the way up Ponderosa Way to Lassen? That's a dream of mine, but I am currently located in s.f. so it's a ways off.

There's been a LOT of talk and speculation on that route, but we've not ever ponied up and done it. Perhaps one of these days. Though, it's a bit sketchy up around Cohasset due to the speedheads and other locals.