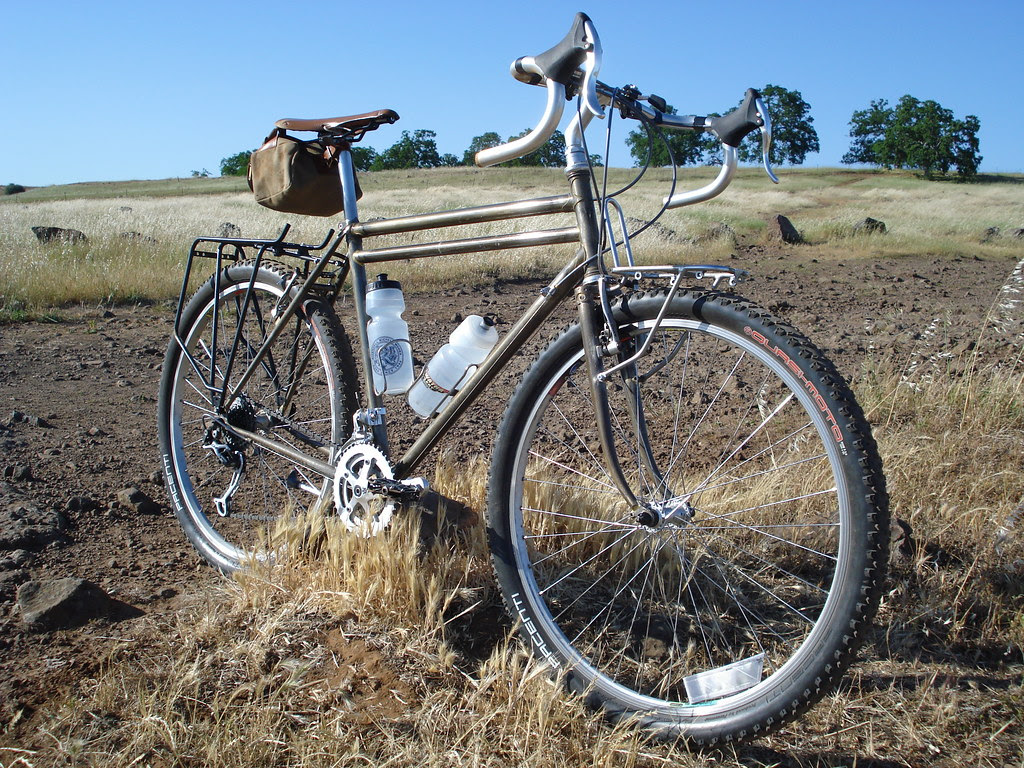 I recently had the opportunity to thoroughly test ride the 52cm twin-top-tubed Rivendell Bombadil prototype, and in short, I can sum it up like this: the Bombadil is a bike that is going to take you by surprise.

Rivendell touts La Bomba as "a stout-tubed mountain bike for rough riding and heavy loads. It's not Dutch-heavy, but by contemporary standards of expensive, fine bicycles, it's out there on the edge."

The one thing I thought when I first picked it up was, "man, this thing is light!" I wasn't the only one that thought so; every cyclist friend that happened to stop by my house during my time with the Bomba said the same thing, neither coaxed nor influenced by me.

Setup
Grant had set the bike up for himself, and I imagine it has been his main steed for a while, as he's working out the kinks and tweaking things. So, when I picked the bike up, I took it as is. 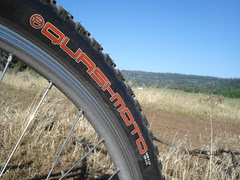 La Bomba was wearing the new Pacenti Quasi-moto 650Bx2" tires, which are billed as Pacenti's hardpack tire. I could post another review on those tires, but I'll just be quick here and report that they are easily as nice as any XC race tire I've ever used, and I used a lot of race tires back in my off-road triathlon days. They're tacky, they roll wonderfully, and the plush factor is that of a Cadillac. Great tires, and I'm praying that Kirk's new smaller knobby will fit my Bleriot. 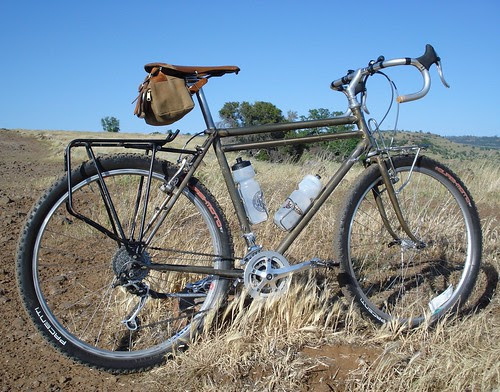 The cockpit was set up with 46cm Noodles, and thumb mount shifters on the flat part of the bar. It was also fitted with a new style Tektro brake lever (not sure of the model) that featured a smooth spoon-like lever - excellent to the touch. Some purists might cry heresy over the V-brakes, but they were just fine for me.

The first thing I did was lower the bars a couple of feet (kidding! only a couple of inches!). After banging it out for a couple of weeks, I would have preferred a flat mountain-style handlebar. I found that in Chico's extremely technical volcanic terrain, that I needed to be in the drops quite a lot simply to have more leverage on the brakes. This is more a result of the terrain where I live, and my personal preferences, so don't take it as a recommendation or anything like that.

The biggest gripe I had with Grant's handlebar setup were the friction thumb shifters. I use friction thumbies on my Bleriot, but on this bike they never quite, um, clicked for me. Firstly, the thumbies felt in the way when I rode with my hands on the flat part of the bar. Lastly, every time I used the top-n-flat part of the bar, the jarring terrain would cause my hands to slightly touch the shifters. After a few minutes of riding I'd have to trim the shifter a bit to remove chain rub and/or unintended rear shifts.

Again, I feel like this is a result of the terrain here. If I rode smoother single track, fire roads, reg'lar roads or gravel roads it would have never been an issue. Below is a photo of a "trail" in Chico on which I tested the Bombadil. 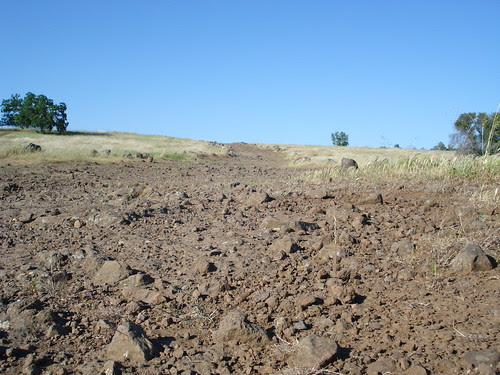 If I were to set up my own Bombadil for pure off-road riding in the Chico/Sierras/Shasta area, I'd use a mountain flat bar and MTB brake levers with trigger shifters. The versatility of this bike shines when thinking about how to set it up though, because you could rig it as a pure mountain bike, a touring bike, an Epic Tour Through Tibet bike, or just a great all-rounder. Any of these setups would suit the Bombadil.

The bike has three bottle cage mounts, and I used two of them. When I first saw the double top tube, I wondered if the second top tube would get in the way when pulling the water bottle from the cage; it didn't.

It's probably my racing past, but I found myself wanting my Camelbak simply so I could pedal and drink while humping over the volcanic baby heads in the trail. Bottle cages + mountain biking over rough terrain = stop every time you want to drink.

The last thing I'll mention about the setup were the pedals. The left pedal was a Grip King, and the right pedal was one of those bad boy Spyder BMX pedals from Tioga. Hands down, for grippyness, the Spyder pedal wins. Even when wet with slick-soled shoes, the Spyder remained sticky. The Spyder pedal also has little spikes installed, which caused a few flashbacks to dented bloody shins, and those BMX Bear Trap pedals we used to use in the early 80s. The surface is significantly smaller on the Spyder than the Grip King though, so over a longer ride, the Grip King becomes the more comfortable pedal.

One other pedal observation I made when riding over Big Rock Technical Stuff is that due to its longer base and thicker body, the Grip King tended to cause more pedal strikes than the Spyder. Clipless pedals would likely eliminate the issue completely. Heh. 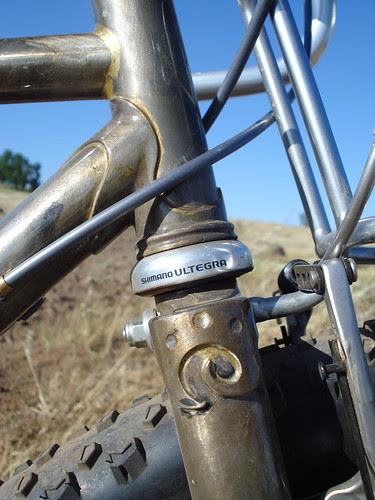 The Ride & Handling
The bike was fitted with the Tubus cargo rack, and a Nitto front rack, which I didn't load or use. So with that in mind, everything up next is in the context of riding without any loads.

Handling is where the Bombadil gets creepy. And by creepy I mean Awesome™. I've ridden one other mountain bike (my USA-made Schwinn Homegrown Factory Pro) that was so sure-footed, so easy to turn at any speed, or that tracks so well when huffing up steep-and-technical pitches at 2mph. When grinding up the most technical terrain, I simply pointed the front wheel, mashed the pedals, and it just went. It just felt like riding a caterpillar (the bug, not the tractor) that slinks over every object you put in its path. Gooey would be a good descriptor. I'm sure this certainly had to do with the Pacenti tires, but the bike's geometry is certainly at work as well. Off-camber turns? Tight switchbacks? No problem.

I was absolutely SHOCKED to find out, after (hesitantly) returning the bike that the trail figure for the Bombadil is 68mm. Make of that what you will.

I'm no weight weenie, but I'm certainly conscious of it in my bikes. Not once when climbing, descending, or riding fire roads or singletrack did it cross my mind that the Bombadil is a heavy bike. I wouldn't race on the Bombadil, but that isn't what it is made for.

Summary
If you have the coin to put down for an exquisitely crafted lugged steel mountain/adventure touring/touring/do-all 650B cycle, the Bombadil might be the bike for you. At $1600 for the frame and fork, it is more in the Mercedes-Benz Gelaendewagen category of off road vehicles. But the enjoyment of the craftsmanship, detail, performance, and interesting conversations that will happen as a result of owning it are, in my opinion, worth it.

I don't know what the final design of the bike is going to look like; I have no idea about the two top tubes, the trail figures, or anything else. But, based on the bike that I ran through the ringer, I wouldn't change a thing about the frame and fork. 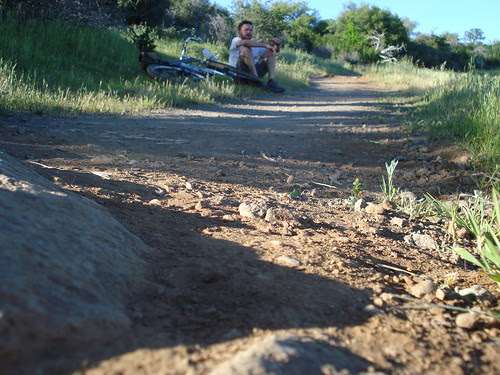 Gino, do you have any experience with an Atlantis? I'd be interested to read how/why the Bomba is different than an Atlantis. I mean I know one is a 650B mostly-MTN bike and the other is a 700C mostly-touring bike, but there does seem to be some significant overlap...?

I've never set foot on an Atlantis, other than putzing around the RivHQ parking lot on one, so I don't have any meaningful info for you there.

It does seem like there's some overlap, but there are more differences than overlap.

Thanks for the review!

I bet if you'd put the bars back up where you found them, you'd be able to ride technical stuff in the drops.

I would. But then that rendered the hoods and flats useless (for me). :-)

I would. But then that rendered the hoods and flats useless (for me). :-)

I actually DID ride most of the technical stuff in the drops, so that I had more leverage on the brake lever (when descending). So bars too low that wasn't the problem.

The problem lied in the thumbies getting in the way of a lot of useful handlebar area up top, causing unnecessary trimming and unexpected shifting. Again, this is also related to the terrain here in Chico.

I know the answer is probably 'No' but did you actually weigh the bike? I am very curious to know the actual weight. I am guessing being fully rigid it's not as heavy as one may think. Certainly I would guess <30lb.

I didn't weigh it, and don't want to guess because I'd certainly be wrong. :-)

From the RBW site -

Thanks for the nice review. I am just wondering how you felt the 52 frame size fit? How tall are you? What's your PBH?

Dirty, rotten, no good, pig-stealing NORMAL SIZED people!!! Ya' think Grant's gonna be handing out any 68cm Bombadils so's us humongous freaks can get the feel for them? I THINK NOT!!! Sigh... Glad you enjoyed it.

Where can I get a set of Quasi Motos?

According to Kirk Pacenti, they should be available again in a few weeks, either from him, or places like BikeMan.com.