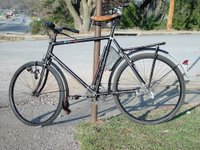 I was chatting with my Swiss friend, Thomas, who also happens to be a cycling nut, and I was describing to him the Bianchi I purchased this evening. He said it sounded like an old Swiss Army bike, at which point he showed me a couple of photos of his.

The bike is called a Militärvelo, and is issued to all Swiss men that serve their time in the Swiss Army. Army service is mandatory in Switzerland, and I think it should be in America too, but that's another story for another blog...

So at the end a Swiss man's army service, he can buy his issued bike for very little money from what I've read. The bikes were redesigned in 1995 (after about 100 years of the original design), and apparently not only men have access to the bikes now. Heh.

Thomas told me that the bikes are in the army surplus stores in Swizterland as well. The next time Claire and I go to Switzerland, perhaps I can convince her to let me ship one back... after all, they're really cheap!
Posted by Gino Zahnd at 10:13 PM

That model is the MO 05 which went into production in 1905 and was produced with little change for a long time, I'm not sure when production ended but I was told that most of the bikes used in the 1990s had been built decades earlier and been rebuilt repeatedly. In 1925 they added a rear drum brake, that was the re-design. In the 1990s Condor came out with a mountain bike like Militarrad that had a short life. I read it wasn't very good in service. It had hydraulic rim brakes and a rear derailleur that weren't happy with life. I think that model is still in production but it costs $3k or something.
I thought about buying one but everything about the bike is strange, the rim and spokes are a 19th century style, the tyre is a beadless 26." One of the extinct sizes, it think it is 565, apparently it's still used on some rickshaws in china. Some models have a braised on seat tube. I'm no stranger to what some people regard as obscure threading and cotter pins but the description I got from the Swiss bike shop I email scared me.

have a look here.
http://tinyurl.com/2y9fmj