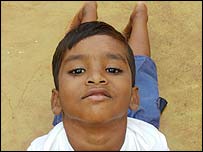 Just on the heels of my recent posts regarding India and distance athletes, I came across this article today via Reuters about a four-year-old child marathoner...

BHUBANESWAR, India (Reuters) A four-year-old child, sold by his mother for less than $20, has been dubbed India's "marathon boy" after he ran 65 km (40 miles) on Tuesday, but critics accused his coach of risking the boy's health for cash.

Budhia Singh, dressed in a white T-shirt and red shorts, covered the distance in just seven hours and two minutes, after setting out to become the youngest Indian to cover the marathon distance.

$20 isn't even 3 pairs of good running socks... and how does one arrive at that price for a child? I'm sure that I can't comprehend the dire poverty from which he came, but it seems horrible to me.

As it turns out in a search for Budhia, Budhia is becoming world famous. After he was re-purchased by a Judo coach/his trainer from his home town, Budhia has been in television commercials and other appearances which are leading to the financial gains of his coach.

I don't think this is quite the way to go about training young athletes. Do you?
Posted by Gino Zahnd at 11:53 AM