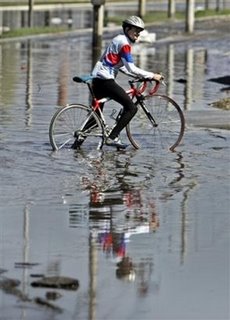 Cyclists from all over the area have begun unloading their bikes to unsuspecting suckers as the rains continue to fall. Where the Lance Armstrongs and Landises once stood tall, there arises a new-found rank of stars with names like Kate Ziegler, Duje Draganja, and Cullen Jones.

Out is the Tour De France, in is the Speedo Spectacular.

Local cyclist, whom we will call "Charlie", was recently overheard sadly muttering the words, "This depressing and endless rain has made me reconsider the sport of cycling here in Chico, after 35 years of riding. I have now decided to switch to another sport (undecided as yet) and hence will put all three of my road bikes up for sale."

After a short period of introspection Charlie said he would use the proceeds from his bicycles and bike shorts to fund a wardrobe that consists solely of speedos, wetsuits, and goggles.

An unexpected rise in kayak sales from North Rim Adventures has owner, Paul McIntyre, completely baffled. "Usually at this time of year the sun is out and we can't keep bicycles in stock. Now they're sitting on the shelves, while our most expensive boats don't stay in the racks more than a few hours. We simply can't stock enough boats," he quips.

In an unexpected business move, Moots Cycles has announced that it will introduce a new line of high end kayaks specially aimed at the California market. In their most recent newsletter they also ensured Moots owners that the company name would remain the same despite the addition of boats to their product line.

Also recently spotted floating out of town was the old bearded bum that has been a landmark outside Zucchini & Vine for the past six months. When asked about the hairy fixture, local resident Rodney Cox simply replied, "well, I don't think anyone will miss that guy."

Rain is forecast through the remainder of the week and weekend.

OMG - That is hilarious!!! Man, I'm telling you, I am seriously looking into getting a kayak. We have a levee across from our house that is about ready to overflow.....which means everything here will be flooded. The bikes are safe and sound though - I have them hanging up inside.

I can tell you, that we have the same conditions over here in switzerland. on top of it it's really cold, so even if I decid to ride, the temperature destroys all the plans.
But I try to take it easy, I still have my indoor bike and the summer is coming for sure.

Commanche Creek isn't looking too flooded and today the weather is looking beautiful.

I'm going to have to cut out of work early and ride so I can still make the Thursday market.